Probably one of my best digital creations in the recent past – Trump raps about how were gonna win in every way. He says were gonna be tired of winning, and I have to say I’m definitely pretty tired of it already…

Anyways, enjoy!  I will be back to my regular content next week! 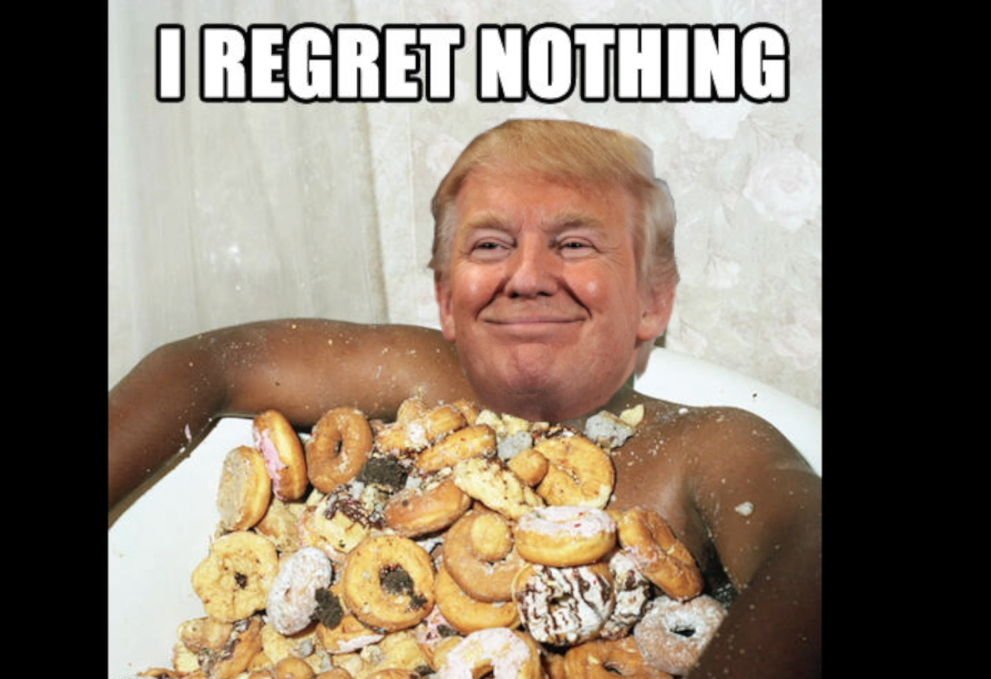 So this past week I got hit with inspiration, and decided to make my own Trump rap song. This is the final product. I’m happy with our it turned out.

Anyone who follows my blog or knows me understands that I’m not the biggest fan of Donald Trump. But honestly, I really like the guy, he cracks me up, and he is very eccentric and truly can be an endearing character.  But I really am not at all a fan of his statements or policies or choices to use divisive rhetoric, as well as his general superiority complex and his dishonest personality. Anyways.

Sorry for the fowl language, but its all straight out of the mouth of our new president. I shuddered a little while typing that lol

I put this together pretty quick with Apple loops in garage band and iMovie.
Enjoy!

This track is Bingin’! This is absolutely my new favorite prank and video!

This Tuesday, Taco Bell gave away one free taco to every customer from 2pm to 6pm as part of their “Steal a Taco” promotion with the NBA. So of course, me and Daniel I. used this opportunity to push the limits of acceptable behavior and, in a costumed charade of silliness, scored 15 free tacos!

This story really begins way back in 2011 when Taco Bell had a promotion involving the World Series. They promised to give every customer a free Taco if a player stole a base, which ended up happening. So of course, Jeremy and I wanted our free tacos, then we decided to make it a little more fun. We wanted to see how many free tacos they would give us. Inevitably, costumes and characters became involved.

The video really tells the whole story, but essentially we went through 2 different taco bells (I cut them out of order in the video, it made it funnier) in 8 different outfits, and got 15 free tacos. The employees mostly seemed to enjoy it, and one even asked up for pictures!

It just goes to show that you can get anything if you make people laugh enough!

Honestly it was a lot of fun. I appreciate Taco Bell for allowing us to take advantage of their generosity, for the sake of good clean fun!

I decided to re-skin A Big Mouth Billy Bass into a Magikarp from Pokémon!

Alright… This one I guess isn’t technically a shenanigan, and it’s definitely not a prank, but it’s still a cool thing that’s definitely fitting on this blog!

So this past summer, my brother was a thrift store and as a joke, bought me one of those tacky old “Big Mouth Billy Bass” things that were popular in the early 2000s. It was actually pretty funny to see one of these things still around! I then got the idea that I could probably make this thing a little more interesting, seeing as if I’m going to have it around, why not actually make it something to display? I then realized how easy it would be to mod into something else! And if I ruin it, oh well, it was like $3!

So I decided to re-skin the fish into a Magikarp from Pokémon! It would be cartoony and easy to do! I ordered some liquid latex off of Amazon, and then started building a base or full-size model of the Magikarp to later mold and make the latex version. I started with cloths hanger wire and duct-tape and papier-mâché. After I got this going, I covered it and reshaped it using layers of clay and duct-tape! I didn’t really have a better medium to work with unfortunately, so this took quite a while (like 10 hours or so before it was shaped properly).

Next, I was going to take my solid model of Magikarp, then make a negative mold of it in silicone, then paint the latex inside of that… But it turned out I didn’t get enough silicone (that stuff is expensive!) so I just started painting the mask latex right onto the model.

The latex painting took forever too, since it needed about 20 layers or so to really be thick enough.At this point, my professor in my prop making class at NKU gave us an assignment to modify an old object and make it new, and he said I could use this project for that assignment, so I now had a reason and time frame to finish it!

Finally, I peeled off the latex and powdered and painted it (poorly, because I rushed) with Acrylics! I made an eye out of some photo paper, and then I stuffed the latex with open-cell foam, like the original Billy Bass. Next I fitted the fish on, and Bam! Done.

Well, I still need to change the name plate and try and fix the mouth to articulate it better!

And maybe repaint it too, hah!