freshman year I decided to make this treasure map and hide it around the building, leading to the non-existent treasure of the misspelled-wrong-name “John P. Calihan.”

The dorm building that I lived in at NKU was called the “James P. Callahan Hall”, but everyone simply referred to it as just Callahan hall. (It was named after Kentucky Senator James P. Callahan, who advocated for NKU funding and had recently passed away)

For some reason one day during freshman year I decided to make this treasure map and hide it around the building, leading to the non-existent treasure of the misspelled-wrong-name “John P. Calihan.” 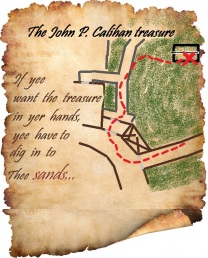 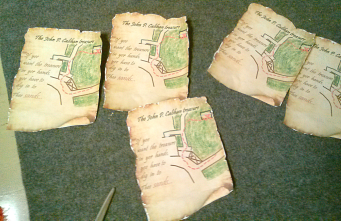 The map led to the sand in the valley ball courts. Of course I didn’t actually put anything there in the sand. But the next day, I checked where I had hidden the maps and they were ALL gone… I looked outside at the valley ball courts and there was obvious evidence of attempted digs… My RA Matt and his roomie Michael had found the maps and spent quite some time digging for it!

He was pretty heartbroken when I informed him it was just a prank… I felt bad for tricking him a little, so I decided he needed a real treasure hunt!

A few weeks later I put together a large 10 part scavenger hunt for him and the other residents in the hallway! It was kind of a spur of the moment thing for most of them, which is why it was so much fun! It included pirate costumes, buried clues (for real this time), cross campus treks, secret codes, historical riddles, unlocked basement maintenance closets, Etc.!

And of course, the treasure of John P. Callahan!  (not the real one, mind you. That’s a secret closely guarded by miles of under-dorm passageways and various freemason booby-traps!)

Fun was had by all!