He’s at it again. Trump is currently taking a nationwide victory tour (despite the fact of not actually winning the popular vote). His first stop was Cincinnati, and I knew it would be a perfect chance to sprinkle some silliness on what was clearly a tense situation for many Americans and protestors. Me and Jimmy A. made some new ridiculous signs and joined the protest section outside briefly before entering the rally with Derek K. The police and a lot of the protestors as well as the Trump-loving audience got a real kick out of them. 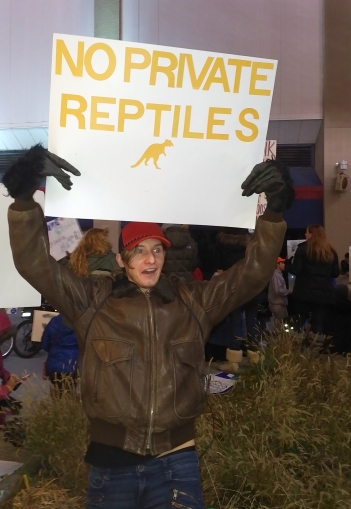 Inside the rally wasn’t actually that bad. Definitely much less energetic and tense than the pre-November rallies.  We joined the audience on the floor and shook our signs. Too our surprise, the signs were pretty well received by the trump fans, and even more so by the reporters in the press box. At least 5 different Press members asked for pictures of me holding the signs, so that was fun.

Jimmy got in some pretty good plugs for his band Sins of Motion, and I hopefully increased awareness of the need to un-privatize our nations reptiles. And dinosaurs. And I just miss Home Improvement.

Probably one of the best gags of the whole night was going through security with my gorilla gloves. Since it was pretty cold and I forgot to pack gloves when I moved in to my apartment, the only gloves I had were my gorilla suit hands. The puzzled look on the security guard’s face when he pulled a pair of gorilla hands out of my bag was priceless. but he didn’t seem to mind the gloves or the odd signs, as if it was completely normal for people to bring in costume accessories when entering a political rally. 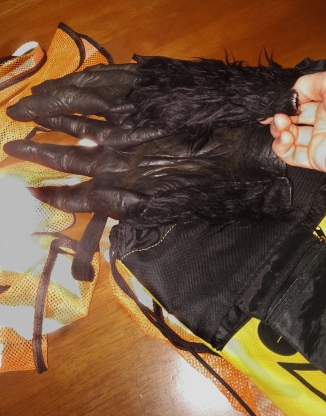 We eventually left when the trump-babble became unbearable, which was about 8 minutes in. From there we walked around the stadium before being asked to leave by security, several of whom greatly enjoyed our signage.

All in all, very fun! Dare I even say, we felt terrific, like we had won, and we had won bigly.