So I received this email from our dorm building manager before Christmas break freshman year, stating that in only a few days from now the dorm mail service would be closed for break, and that they could not make ANY EXCEPTIONS….

I found this a little hard to believe… There has to be some circumstance in which an exception could be made! I decided to try to find out, and replied with this message

My friend must be too scared to ask for himself! The building manager sent me this email in return:

Green light! Now I can really have some fun with it! I read somewhere that it is legal to mail alligators up to two feet long through the US postal service (although this no longer appears to be the case), so I thought why not go for that!

Unfortunately he didn’t bite… And by he, I mean the building manager. He assumed I was joking… and I was.
Though at the time, I had an elaborate idea to mail myself a box like this one 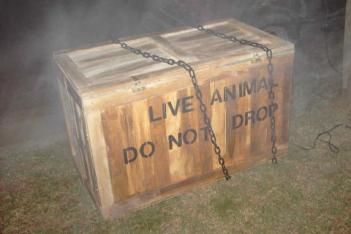 But with a speaker and battery inside that would play crocodile noises every few hours! Sadly I didnt bother to do that at the time…
Oh how I regret not doing that! That would have got me a response!

I later sent him another message (or thought I did, but now I’m realizing I sent it to myself!) detailing the beast’s condition

I wondered why he never replied to that! But I also wonder if he would have anyways!

Either way, my friend’s croc was pretty furious during the unboxing…